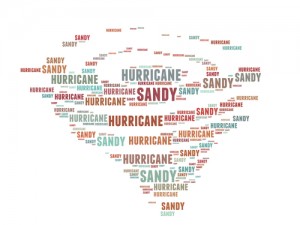 Hurricane Sandy was a hot topic on Twitter. via Shutterstock

On Monday, Oct. 29 two clothing retailers received backlash after using a natural disaster as an excuse to tweet about promotions for those affected by Hurricane Sandy. You can read the responses to the tweets from American Apparel and the GAP at Mashable.

American Apparel tweeted out promo code SANDYSALE for a Hurricane Sandy Sale that would give you 20% off a purchase. If you’re wondering,

the sale is over. It lasted 36 hours and was only available in the areas affected by Sandy. Later in the day, GAP sent out a tweet asking those affected by Sandy to stay safe and ride out the storm by shopping their online store. Oops!

Note, this is not the first time an advertiser raised eyebrows. Remember Groupon’s Super Bowl commercial that promoted half-off restaurant deals while making light of the plight of the Tibetan people?

I find the American Apparel and Gap tweets to be silly and insensitive. However, as someone who updates our Twitter and Facebook page, I understand how important it is to be relevant. The problem with these instances is the retailers were self-serving. Reminding folks to shop when their lives may be in danger is insensitive.

You may recall that after Sept. 11, consumers where instructed to open their wallets and shop to help the economy recover. From what I recall there wasn’t much fuss made. Of course, this may be because the instructions where given by political leaders, not retail stores trying to increase their bottomline. Plus, days had passed before we were asked to start consuming again.

This begs the question, how soon is too soon to begin shopping after a tragedy?

Do you find the retailers’ tweets to be offensive or do you believe the twittersphere is overreacting?