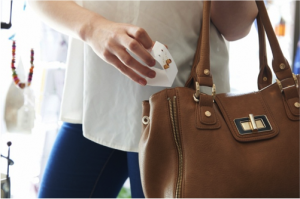 The numbers don’t lie, and despite the casual term of “shrinkage,” retail losses due to theft and to human error are a multi-billion dollar problem that only grew the economic recession, and has not let up since. Whether it’s unintentionally selling something for a price lower than cost, or a kid stealing something they want but can’t afford, or even organized retail theft by organized criminal gangs, a lot of little losses can add up to a crippling financial blow to a small business.

According to the National Retail Federation’s recent report on shoplifting, $13 billion a year walks out of the door with shoplifting kids looking for a thrill, kleptomaniacs, unscrupulous employees, and even professional shoplifting gangs who account for about $30 million of loss annually on their own. Despite cameras, magnetic merchandise tags, live security, and other shoplifting countermeasures, shoplifting is a growing problem that has not been alleviated by improvements in the economy. While larger retailers can track and quantify the problem in their stores, smaller businesses who don’t know how much they’re losing to human error or even outright theft are in greater danger.

Getting On Top of It

The first part of understanding how loss is affecting you is by getting your inventory, accounting, and transaction flow under control. You need to use the same tools that the big league stores use, and then implement your own loss prevention measures. Part of doing this is by modernizing your operations in the store, your back office, and in the stock room or warehouse. Not all that long ago, this might have been an insurmountable financial peak for a small business to scale, as a state of the art POS system with real time inventory and accounting capabilities was about as accessible as the peak of Everest. You could get there with enough time, enough money, and enough resources, but if you didn’t have all three, you weren’t going to get anywhere fast.

However, changes in technology and in how data is stored and moved have changed the game for small businesses, allowing them to access services and software that they couldn’t afford before. The reason for this is cloud based computing, and Inc Magazine estimates that in a little less than six years, 80 percent of all businesses will be using it for most of their software and service needs. This includes accounting and payroll services like QuickBooks and Wave, creative suite products like Dreamweaver and Photoshop, and productivity software such as MS Office and Outlook. Fortunately for the small retailer, this also includes using a full service tablet based POS system – which eliminates the need for expensive proprietary software and professional developers to make everything work together.

Save Money, Save Sanity, Save Your Business

Simply put, you don’t know what’s walking out the door; whether it’s being “boosted” or if there’s a genuine factor of human error in cost accounting, ringing up the wrong price, or because you forgot to factor in a price increase. While implementing a new POS system takes time, a great deal of effort, and getting aboard the learning curve, it does not take a few thousand dollars as it once did. With outlets from the venerable NCR, to your local retail supply store, to eCommerce platforms, it is possible to build a system all your own for between $500 to a little over a thousand if you include the cost of an iPad or Android tablet.

Let’s use Shopify as an example of how to build a POS system. You will need an iPad, for the sake of argument, call it an iPad Air.

For a total of $1,316 you have a POS system that is scalable, portable, and ready for you to use in organizing your inventory. If your bank offers the mobile check deposit, you might even skip having a check scanner. Better information systems, according to the Houston Chronicle, help to stop losses, and a POS system is an information system first, as well as a sales tool that can generate reports on your sales that gives you the who, the what, the where, and the when information you need to keep your business growing. Charting your sales can also pinpoint the identity of the person ringing up a sale, and track what inventory isn’t in the system as sold, but seems to have gone out the door in any case. Starting now can give you a much finer control of all your business operations not only wherever they are, but wherever you are.