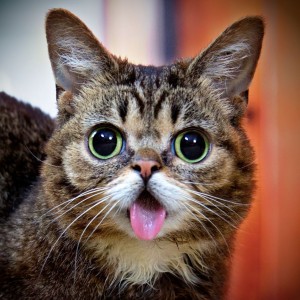 It’s been said that the Internet was made for cat videos. And photos. And memes. But it’s not just about watching a fat cat squeeze into a large pot or two cats chirping to each other. Some famous Internet cats use their notoriety to help other animals. One of these cats is the famous feline from outer space, Lil Bub. This adorable “perma-kitten” is a rescue who was born with a multitude of genetic anomalies, including feline dwarfism and missing teeth which give her the demeanor of…possibly the world’s cutest cat. And thanks to lots of love and care, one of the world’s happiest cats.

Lil Bub’s birthday is June 21st and instead of gifts, she wants you to give to other special needs cats… and score some really awesome merchandise in the process.

If you want to treat yourself to cat-themed items, do now guilt-free, as a portion of your purchases will go to helping animals. 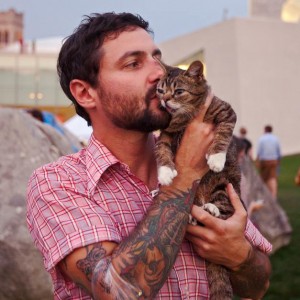 I interviewed Bub’s human, Mike Bridavsky, via email and asked him about his famous cat’s incredible philanthropic side.

Tell me about Lil Bub’s BIG FUND and her goal to raise $50k in the month of June.  How close are you to that goal? Lil BUB’s Big FUND was something that BUB and I have been working on with the ASPCA Grants department. It was officially announced in February of this year, and it is one of the only national funds dedicated to special needs pets. All of the money collected for the fund gets turned into grants which are rewarded to shelters all over the country who have animals that need extra help getting adopted. This includes everything from blind pets, to elderly pets. Money gets collected through direct ASPCA donations, and from sales of BUB merchandise from the BUB STORE. Within the first couple months, Lil BUB’s Big FUND was able to raise and award $25,000 worth of grants to shelters all over the country. And for our next round of grants, BUB wants to raise another $50,000 in the month of June alone as a birthday gift to herself.

Even though I haven’t busted out the “big guns” yet, we have already raised close to $10,000 this month for the FUND. But I have yet to announce two personalized limited edition art prints, signed books, handmade tea cup sets, three meet and greets and some other big stuff, with all profits going to the fund. According to my calculations, all of these things will get us to exceed our goal.

Tell me about how you started the BUB STORE. The BUB STORE was started more than two years ago. In fact, one of the main reasons BUB started getting so famous is because my good friend David had designed a BUB shirt for fun (the Classic BUB design), and people loved it so much. We sold them for fun, mostly to friends, but before we knew it we were getting orders from all over the world. And when fans started requesting other merchandise, I started the BUB STORE. To this day, David continues to design all of the BUB merch, my friends continue to print and manufacture it, and my friends’ fulfillment company continues to do the mail order.

From the very beginning I have been donating a portion of the proceeds to animals in need. I started by donating to our local shelters, but as BUB’s popularity grew, I realized I needed to create a national fund to funnel the money into, so that charitable funds could be distributed fairly, which is how the idea for Lil BUB’s Big FUND started. I normally donate 10% (since we design, manufacture and distribute everything ourselves, there is an enormous overhead to the BUB STORE, and I donate as much as I can while being able to keep up with our expenses), but for the entire month of June, I will be doubling that contribution, and on BUB’s actual birthday, June 21st, I will actually be donating 100% of the proceeds from everything sold in BUB STORE, all in an effort to meet, or better yet, exceed our goal of $50,000.

In addition to that, I am going to be offering limited edition items with 100% of the profits going to the fund. This includes personalized art prints, hand made tea cup sets, signed books, limited edition BUBIRTHDAY Shirts. And on top of that, we will be doing three regional meet and greets, where fans can donate to the FUND in order to meet BUB. The past two meet and greets we’ve done (in Oakland, CA and Austin, TX) have each raised $8,000 in only a few hours.

Unlike most cats, Bub seems incredibly comfortable traveling, doing meet-and-greets, being petted by strangers and being held in your arms in public (not in a carrier).  Do you think this sense of accessibility and approachability has helped make her more of an Internet sensation? Yes, BUB is unlike most cats, including my 4 other rescues, in that she not only is ok with travel and public places, but actually enjoys it. In fact, the traveling is actually good for her bone condition, and during trips her mobility and mood lifts tremendously. And her ability to travel, appear on live television and meet people certainly has added to her success. I’d like to point out that BUB has always been like this, and I have never done anything to “train” her for this – it’s just the way she is. In fact, I am still extremely protective of what type of events we do, and very particular about how they are run. For example, before we went live on “The View”, I asked the producers to ask the crowd to “awwww” instead of cheer and clap because I know that BUB gets startled by applause. And even though it was cheesy and sort of lame, BUB was calm and happy, which is all that matters to me. As for being “more of an Internet sensation”, well I don’t consider her to be an internet sensation. BUB is a real sensation, she is a real cat, wrote a real book, starred in her own real television special, and has raised real money for real animals in need.

Bub has a book, a talk show, a documentary, merchandise… what’s next in her plan of world domination? Well to be honest BUB doesn’t have a plan. Well if she does, she doesn’t share it with me. Every single thing that’s happened, from the talk show, to the documentary, to the book – that’s all come to us naturally and organically. Just an email in BUB’s inbox. I have never signed up for a manager, and I have never sought out a single opportunity. In fact I turn down a lot of offers we get because I don’t feel they are right for BUB or fit in with her mission. So… as for what’s next, I have no idea! I like to keep it fresh and feel surprised and excited with each new opportunity, but I am also completely satisfied if nothing else ever comes along. So long as BUB is happy and healthy, so am I.

What else you would like to see Bub achieve in her time here on our planet?  What is the ultimate goal? I think BUB has already far exceeded anything anyone could have expected from her. She’s regained mobility and overcome an extremely rare bone disease, she’s helped save hundreds of thousands of animal lives, raised hundreds of thousands of dollars for animals in need, she’s been an inspiration and source of happiness to millions of humans all over the world, has written a book, had her own prime time TV special, an award-winning documentary, hosted a talk show and created the first national fund for special needs pets. But the ultimate goal for me through all of this is to ensure BUB’s happiness and health. And I’m happy to report that she is the happiest and healthiest she has ever been, and believe it or not, that wouldn’t be the case if she hadn’t become a famous feline, because only through her fame were we able to find answers and proper treatment for her condition. So in roundabout way, I think BUB’s ultimate goal through all of this was to find a cure for herself, and now she’s returning the favor by giving back.

Other cats/cat sites that give back:

Internet celebrity Grumpy Cat has donated to animal shelters and now so can you. Here are some other sites where you can buy cat-themed merchandise and have a portion of your purchases go to animals in need: 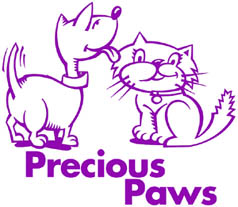 What are your favorite animal charity sites?